Of all the characteristics of the digital era, perhaps the most important is the shift in power away from the organization toward the customer. This customer empowerment and the commensurate focus on delivering value throughout the customer journey is transforming the way companies do business at a fundamental level. 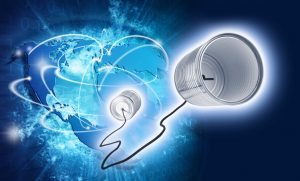 Welcome to the experience economy.

The experience economy touches everyone. True, we are all consumers, but this shift in focus has permeated well beyond the customer and is now the de facto expectation of employees, partners, suppliers, and anyone else interacting with every company, large and small.

You Can’t Have Trains without the Tracks

It may seem that the experience economy came out of nowhere, but in reality, this power shift has been going on for many years – essentially since the World Wide Web took off in the mid-1990s. From Web to eBusiness and now to Digital, technology has underpinned this fundamental transformation of business.

Today’s plethora of digital technologies is complex, varied, and extraordinarily dynamic, providing value to companies and their customers in numerous, multifaceted ways.

Underneath all of this power and value, however, is the Internet itself – and broadly speaking, networking technologies in general.

Given the seeming ubiquity of network connectivity today, it’s easy to forget how fundamental networking is to the digital era. Imagine, however, a world without networking. No Internet. No smartphones. No Amazon or Netflix. No Web, email, or any of the other diverse and various services we’ve come to depend on in our day-to-day lives.

In fact, we’ve so taken the network for granted that any slowdown, any glitch in performance solicits howls of consternation. No one wants the dreaded hourglass or spinning wheel, regardless of whether we’re in the midst of watching Stranger Things or conducting a videoconference.

It doesn’t matter how modern and wonderful your train is if there’s a problem with the tracks.

Network Performance in the Digital Era

In reality, there are many factors that impact the customer, employee or partner experience beyond the application itself. Chief among them: network performance.

Network performance has been a business concern since American Airlines’ SABRE reservation system went live in 1960, featuring a network connecting two mainframes. In the decades since, maintaining performance has become an increasingly difficult task, as technologies that depend upon networks proliferated.

Today, a new generation of application-aware networking technologies promise organizations a new way to shape, tune and protect the digital experience for their customers, employees, and partners as they march forward into the digital era.

Broadly speaking, this next generation of networking technologies falls under the moniker Software-Defined Networking(SDN).

Much of the SDN story takes place inside data centers, both for enterprises and hyperscale cloud providers.

One segment of the SDN market, in contrast, reinvents how businesses leverage the Internet and other networking technologies to deliver value to customers and other participants in the experience economy: Software-Defined Wide-Area Networking, or SD-WAN.

The original purpose of SD-WAN was to simplify and reduce the costs of connecting remote offices to headquarters locations – hence the WAN part of the story. Today, SD-WAN technologies still deliver this value, but as the experience economy takes hold, SD-WAN has found new value propositions well beyond remote office connectivity.

The Evolution of SD-WAN

These products can make packet-specific (or even sub-packet-specific) routing decisions that optimize the use of available networks. The result is maximum performance, while allowing businesses to run much of their traffic over standard Internet broadband, rather than the much more expensive dedicated MPLS lines that had previously been the favored technology for WANs.

Network performance, of course, is an essential enabler of the experience economy – but application-centricity is every bit as important.

Because networks deal with packets, traditional networking technologies have little visibility or control over what people do when their aps assemble packets into the messages that support application interactions.

SD-WAN technology merges the network and application contexts, giving network admins the ability to manage and control network-based services within their business context, as well as enabling networks to automatically adjust to the networking needs of different applications in real-time.

Your average office worker or Netflix viewer is unlikely to realize when SD-WAN technology is improving their digital experience – but increasingly, this rapidly maturing market is playing an integral part in various networking scenarios, from remote offices to cloud-based SaaS apps to over-the-top (OTT) video-based consumer services.

Network performance is the obvious SD-WAN value proposition. Reducing the costs of network connectivity given the range of different purposes that people use networks for is another.

Perhaps the most strategic SD-WAN value proposition of all, however, is business agility. The days where setting up a network meant plugging in a bunch of cables are long gone. Today’s networks are dynamic, ephemeral, and responsive to customer needs and desires.

By providing such agility, SD-WAN makes the experience economy a reality.

Copyright © Intellyx LLC. CloudGenix is an Intellyx client. At the time of writing, none of the other organizations mentioned in this article are Intellyx clients. Intellyx retains full editorial control over the content of this paper. Image credit: Patrick Bombaert.